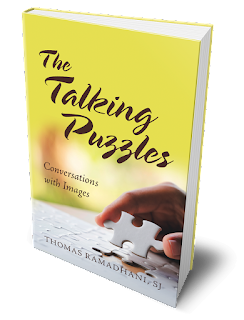 A new book. Published in 2019. It's about my experiences working on jigsaw puzzles. Eight images on those jigsaw puzzles became new metaphors for spiritual life.
Posted by Deshi Ramadhani, SJ at 3:29 PM No comments: 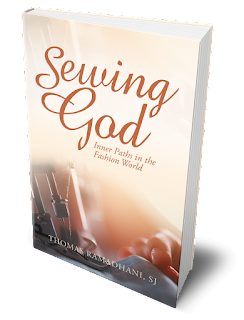 A new book. Published in 2019. It's a spiritual memoir about my mother whose passion is in sewing. God speaks through the ordinary, in the messiness of day-to-day life, including in every part in the process of creating dresses and beyond.
Posted by Deshi Ramadhani, SJ at 12:05 PM No comments: 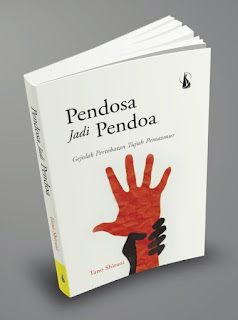 Namaku Lazarus -- My Name is Lazarus 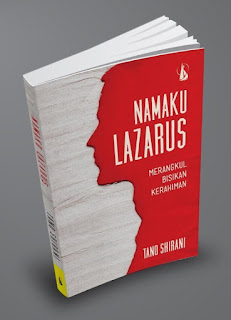 A new book. Published in 2016. It's a narrative from the point of view of Lazarus (in John 11) who was sick, died, was brought back to life by Jesus, and received life threats in his second life.
Posted by Deshi Ramadhani, SJ at 11:51 AM No comments:

Just now, I was browsing the Inbox on my Yahoo account. I was looking for an important E-mail that I had to reply. Using my iPad, I typed the keyword and touch on the “search” tab. No result! Angered, I began to curse the iPad makers. Then I decided to scroll down and cleaned up the junks, hoping that eventually I would find the missing E-mail. A flash suddenly came. Hellooo…stupid…! You should have checked your Inbox in your cell phone. Sure enough, in a second, I found what I was looking for. It turned out that it was a text message, not an E-mail!

I was dumbfounded. How silly! It then occurred to me, that it was just a small icon, a gentle reminder about how I have been living. God knows, how many times I have tried to find answers to my longings in wrong places. The answer is actually there. It has been given, but I was looking for it in the wrong “Inbox.” Still worse, when I can’t find it there, I begin to blame the One who should have made “the search system” better.

Today the Catholics remember Mary as Our Lady of Sorrow. I have a strong sense, that often times I have made Mary sad, because I still want to keep myself busy looking for the sophisticated answers from God in the wrong “Inbox.” “Dear Jesus, help me to find the right Inbox where I can find You…”
Posted by Deshi Ramadhani, SJ at 9:51 AM 1 comment:

There is a saying from St. Augustine, "There is no saint without a past, no sinner without a future." How true it is. A person has become saint because he or she has let God to touch their past. With God's grace, everything in the past makes more sense. Even every single sin we committed in the past can bring wonderful meanings. Our shadows are no longer pitch dark, but a comfortable shade under which we can have happy nap.

Divine Mercy Sunday reminds us that true mercy is always divine. When someone forgives me, I know deep in my heart that this person brings me back to my divine identity, because this person has also been rendered divine by God. If this has happened in Peter, Paul, Mary Magdalene, St. Augustine, St. Ignatius of Loyola, and a great number of saints, this can and will happen to each of us.

The question is: Are we ready to take off that "sinner" tag on ourselves, and put on that "saint" tag? For some reasons, we wish to linger longer with the worse tag...
Posted by Deshi Ramadhani, SJ at 6:48 PM 3 comments:

I was recently invited by a family for a lunch. They had promised to send a car to pick me up. I was so surprised when I saw a brand new Jaguar entering our parking lot. Apparently, they wanted to treat me well. So I got in, and as you can guess, I was stunned by everything inside. I was almost literally frozen, because I was afraid that I would do something that would make a scratch or a scar. Yes, I admit, it did feel so so so good. I felt like being in a completely different world.

Later that day, I had to say Mass in memory of one of our beloved sisters. It was a remembrance Mass, one year after her death. She had been diagnosed with a very rare, aggressive, and deadly cancer. Her death after only several months since the first diagnosis was so painful, although we knew that it was a liberation for her. I know that now she is in another world, completely different from the one I live in. And I know, it must feel so so so good up there.

Both experiences became an invitation for me to see death from a different perspective. If I could enjoy and feel so good only in tasting that "beautiful world" inside that Jaguar, how much more God has in store for us. The bliss of eternity is way more than the short glimpse inside that Jaguar. Although death of a loved one is always painful, I want to believe that in the end, it must feel so so so good for the one moving from among us to be with God.

P.S. Well, it's embarrassing to admit that I wouldn't mind another trip with that Jaguar, a longer one if possible. Oh no, this should not be read as part of the spiritual reflection.
Posted by Deshi Ramadhani, SJ at 6:10 PM 3 comments: 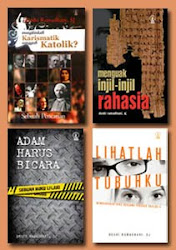 Deshi Ramadhani, SJ
My full name is Thomas Aquino Deshi Ramadhani, SJ. I was born in Jakarta, December 12, 1966, and grew up in the same city. I'm a Roman Catholic Priest, a member of the Society of Jesus, known as the Jesuits. I graduated from Driyarkara School of Philosophy (1992), earned S.T.B., Baccalaureate in Sacred Theology, from Gregorian University, Rome (1996), S.S.L., Licenciate in Sacred Scriptures, from Pontifical Biblical Institute, Rome (1998), and S.T.D., Doctorate in Sacred Theology, from the Jesuit School of Theology at Berkeley, California (2004). I teach Scriptures at Driyarkara School of Philosophy. I have written four books in Indonesian: "Menguak Injil-Injil Rahasia" (2007) [Unveiling the Secret Gospels], "Mungkinkah Karismatik Sungguh Katolik? Sebuah Pencarian" (2008) [Can Charismatic be Truly Catholic? A Search], "Lihatlah Tubuhku: Membebaskan Seks bersama Yohanes Paulus II" (2009) [Look at My Body: Setting Sex Free with John Paul II], and "Adam Harus Bicara: Sebuah Buku Lelaki" (2010) [Adam Must Speak: A Book about Men].